I was introduced to Cooperative Learning structures more than a year ago by a colleague/fellow. She taught a course of 4 lessons or workshops at my school.

This week I tried some of Spencer Kagan’s CL-structures in my classes.

The ‘Inside-Outside Circle’ seemed to work well, not least for the students who tend to hide themselves a bit during traditional classroom ping-pong teacher-student sessions.

I split the students in two groups; the tallest vs. the shortest (the criteria is arbitrary, but it is a bit of fun to line up according to height). The shortest form the inner circle, the tallest form the outer circle, facing a short peer. For 1-2 minutes they do a small assignment in pairs , before they rotate to a new partner and a new assignment.

(In the video above, the students are in the school yard, but I asked the students to move tables and chairs to make room inside the classroom. Actually, it might be better to go outside.)

In a course on the Palestinean conflict I simply put theses questions on the classroom projector for the students to read. For every 1-2 minutes and every letter, the outer circle rotated, like in the video above.

a) Bring the best question from your group work and quiz each other.

b) ( inner circle ) – Explain why the 1967 war was a ” disaster” for the Palestinians – and which territories Israel captured .

c) The tall (outer circle ) – Explain what the PLO is, and why it was created. What are its goals and means. The smallest : React to the explanation as an Israeli.

d) You are Jewish Israelis and meet  in your local supermarket: The shortest: Tell the tall about PLO. Discuss how Israel should deal with it.

e) The short (inner circle ) – Explain why Sadat would attack Israel in 1973.

g) The smallest ( inner circle ) : Explain why the PLO was expelled from Jordan ?

h) In 1974 the PLO obtains observer status at the UN. The tall (you are palestinean): Explain why this is reasonable. The smallest (you are Israeli) : What are your concerns?
i). The smallest : You are an American jew,  who support Israel. Explain why the United States and Israel have a ” special relation -ship .” The tallest : Ask why he/she doesn’t live in Israel?
j) The highest : Explain what AIPAC is – and why critics believe it could jeopardize U.S. interests in the Middle East.

k) What have you learned from a-j?

It is noisy and a bit chaotic. But also fun. The students engage differently with each other, than they would with me. They smile and laugh more. And they definitely speak more overall, than they do in classroom sessions.

The circle session takes about twenty minutes, so my plan for this unit was:

I will definitly use this structure again – and try some of the other structures as well.

Even as an old fart, it is never too late to expand your pedagogical palette. 😉 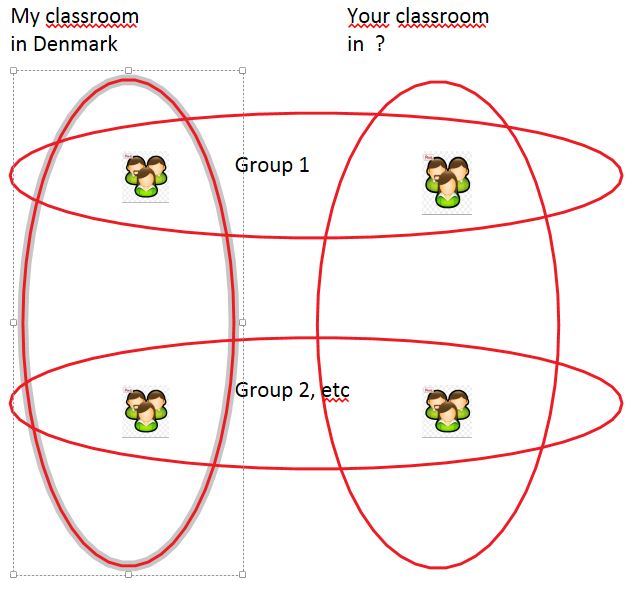